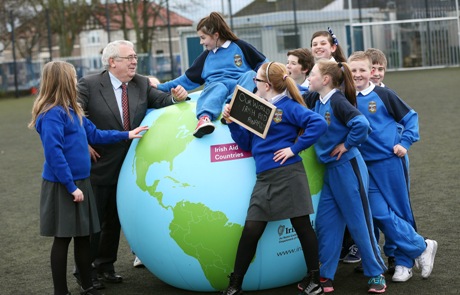 Minister for Trade and Development Joe Costello joined students at Gaelscoil Bharra in Cabra today to launch the Our World Irish Aid Awards 2014.

Minister for Trade and Development Joe Costello TD joined students at Gaelscoil Bharra in Cabra today to launch the Our World Irish Aid Awards 2014. This year marks the ninth anniversary of the Awards, which were established by Irish Aid in 2005 to help children in Ireland understand global issues and the role of Ireland in meeting the United Nations’ eight Millennium Development Goals (MDGs).

Through the exciting three month programme, primary school students between the ages of 8 and 13 will learn about the lives of children in developing countries, and will then undertake a creative project to express what they have learned under a given theme.

The eight MDGs are concerned with poverty, hunger, protecting the environment and improving quality of life for those in developing countries. This year’s theme, ‘A Better Future for all the World’s Children’, relates to all the MDGs and enables children to explore all aspects of Irish Aid’s work in developing countries. Students can then work together and express what they have learned in a number of creative ways, including writing, film, or music.

All entries are judged on their creativity, understanding of the theme and their impact. Schools whose projects show creativity and a good understanding of the theme will receive an ‘Our World Irish Aid Awards’ plaque at the regional awards ceremonies in May, and a selection of the top entries will be invited to receive an award at the final awards ceremony in June. At this ceremony, the judging panel will then select one outstanding project to achieve the overall ‘Our World Irish Aid Awards’ trophy for 2014.

“Significant progress has been made in meeting the eight Millennium Development Goals since they were agreed in 2000, and Ireland has contributed to this remarkable success. I am encouraging pupils from all over Ireland to use their imaginations to think of the differences between their lives and the lives of children in the developing world. I am very much looking forward to seeing the projects, which I have no doubt will be both educational and creative.

Irish Aid is the Government’s programme for overseas development. It is managed by the Development Cooperation Division of the Department of Foreign Affairs and Trade.

The Our World Irish Aid Awards seek to raise awareness among primary school students of the eight Millennium Development Goals, which were agreed in September 2000 by 189 countries of the United Nations, including Ireland, and of the work of Irish Aid.

The 8 Millennium Development Goals are as follows:

6)      Combat HIV/AIDS, malaria and other diseases

8)      Develop a global partnership for development