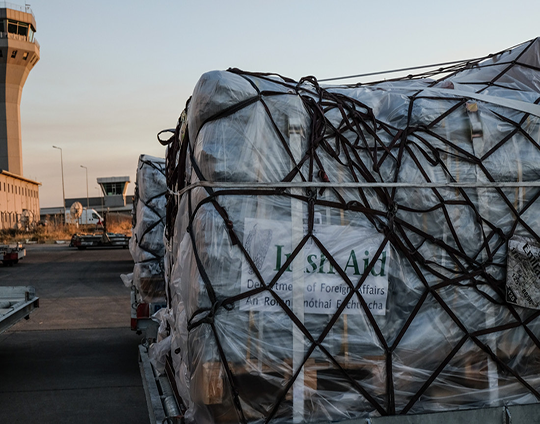 The Minister for Foreign Affairs and Trade, Charlie Flanagan T.D. and Minister of State for the Diaspora and International Development, Joe McHugh T.D. have announced that Ireland will this morning (Friday) dispatch 80 tonnes of humanitarian relief supplies to northern Iraq.

“Ireland’s donation of emergency relief supplies builds on our contribution last month of €1.5 million to the UN’s Iraq Humanitarian Pooled Fund which is helping our partners on the ground to provide life-saving humanitarian assistance to those most in need throughout the country.

“Tens of thousands of people have been displaced in recent weeks and further massive population displacement is expected as the conflict between Iraqi government forces and ISIS intensifies around Mosul.

“This continuing large-scale displacement requires increased and urgent humanitarian assistance to protect vulnerable families and meet their basic needs. I call upon the international community to urgently scale up its response efforts along the Mosul corridor.

“Today’s airlift comprises over 34,000 relief items, worth €450,000. It will be dispatched from the UN Humanitarian Response Depot in Dubai, where Irish Aid pre-positions supplies for use in emergencies and humanitarian crises.

“The airlift, including blankets, jerry cans, cooking sets, water tanks, tarpaulins and shelter kits, will arrive in Erbil later today and will be distributed by Oxfam to vulnerable populations displaced by the conflict in Mosul and surrounding areas which have been under the control of ISIS for over two years.”

“The conflict in Iraq is having a devastating effect on the civilian population. Intensified fighting in and around Mosul will increase the risks to civilians and families trying to flee areas controlled by ISIS are expected to be at extreme risk.

“Urgent action is required to provide emergency shelter and protection, water and sanitation, and food and medical assistance to the newly displaced. We are monitoring the situation closely and will consider further humanitarian funding in Iraq in the coming weeks.

“In addition to our funding and relief supplies, Irish Aid recently deployed a member of the Rapid Response Corps to provide essential surge capacity to the UN’s Office for the Coordination of Humanitarian Affairs in Erbil to help coordinate the Mosul crisis response.”

Notes to the Editor:

• Irish Aid is the Government’s overseas assistance programme. It is managed by the Development Cooperation Division of the Department of Foreign Affairs and Trade. For further information see www.irishaid.ie
• The Iraq crisis, one of the most severe humanitarian crises in the world today, began in 2014, with the rise of ISIS, following a period of relative stability in the country. ISIS has taken over considerable territory in Iraq which, combined with the Government response, has caused the displacement of over 3 million people, and some 10 million people are currently in need of humanitarian assistance. It is estimated that up to 13 million people will require humanitarian assistance by the end of 2016.
• The United Nations’ Humanitarian Response Plan for Iraq for 2016 appeals for $861 million to meet needs in the country this year, and it is currently 43% unfunded. Ireland provided €1.5 million in humanitarian support to the Iraq crisis so far in 2016, €1.25 million in 2015, and €1.15 million in 2014.
• Mosul, the second largest city in Iraq, was captured by ISIS in mid-2014 and it is estimated that up to 1.5 million people are still in the city of Mosul, living under siege, and that another 1 million people are in surrounding areas of Ninewa and Salah Al din also living under the control of ISIS.
• In recent months, the Iraqi government forces began an offensive in the southern Mosul corridor to retake the city of Mosul. It is estimated that up to 660,000 more people will be displaced in the areas close to Mosul and that 1.5 million people are likely to be impacted in Mosul itself.
• The recent United Nations’ Mosul Crisis Flash Appeal, launched at the end of July 2016, states that the humanitarian operation in Mosul is likely to be the single largest and most complex in the world in 2016.
• The Mosul appeal calls on humanitarian partners to pre-position water, sanitation and hygiene supplies in strategic locations for immediate distribution to families on the move, and in areas where displaced families are fleeing to and will flee to. It also requests partners to prepare camp sites and construct shelters to support families displaced from Mosul and to pre-position materials for shelter construction.
• As part of Ireland’s Rapid Response Initiative, Irish Aid pre-positions emergency and humanitarian relief items within UN Humanitarian Response Depots around the world. These depots are strategically located near disaster and crisis prone areas - in Accra (Ghana), Brindisi (Italy), Dubai (UAE), Panama City (Panama) and Subang (Malaysia).
• So far in 2016, Irish Aid has airlifted 315 tonnes of emergency relief supplies into crises to meet the immediate needs of drought and flood affected families in Ethiopia, displaced and conflict affected families in South Sudan, the Central African Republic, Niger, north eastern Nigeria, and in northern Iraq.
• Also as part of Rapid Response Initiative, Irish Aid manages the Rapid Response Corps, a roster of highly skilled individuals who deploy at short notice to assist in emergency relief efforts. 34 rapid responders have been deployed into crises so far in 2016, including into Ethiopia, DRC, Nigeria, Sudan, Uganda, Tunisia, Macedonia, Greece, Jordan, Lebanon, Turkey, Iraq and Ecuador.