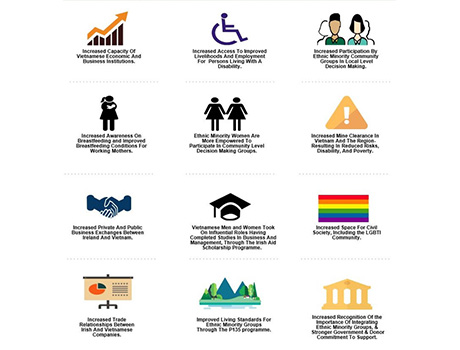 The evaluation of Ireland’s 2011-2015 country strategy programme in Vietnam and the sub region (Cambodia, Laos and Myanmar) provided an independent assessment of the overall performance of the programme, providing accountability for the funds expended during the period and identifying learning to inform policy and programming for Ireland’s role in an emerging middle income country.

Vietnam having transitioned into lower middle income country status faced the challenge of sustaining progress and ensuring that economic growth is more inclusive and resilient to shocks. Ireland supported the Government of Vietnam to maintain continued growth which benefits all and reaches the most vulnerable and marginalised groups.  Ireland’s programme did this through two themes:

Inclusion: to reach people who have not benefitted from Vietnam’s development to date.  Ireland focused on the most marginalised, in particular ethnic minorities, the disabled and LGBTI populations, through supporting the Government of Vietnam’s Programme on Ethnic Minority Poverty and support to civil society.