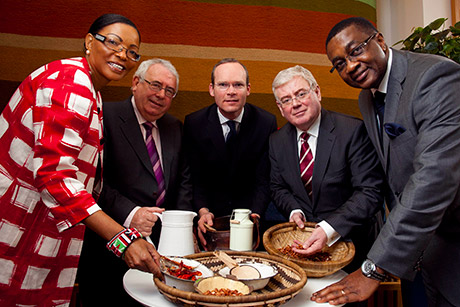 I am delighted to be opening the second day of this Policy Dialogue on Aid for Trade with Minister González.   I hope our work today will build on yesterday’s positive discussions.  I would like to take this opportunity to acknowledge the key support which the OECD has provided to the Aid for Trade initiative through its partnership with the World Trade Organisation.

The Aid for Trade initiative has led to trade becoming a development strategy priority.   It has led to commitments being increased with the aim of reducing the barriers to local producers’ access to regional and global markets.   The initiative is a good example of policy coherence for development, another important area of OECD work.

The Aid for Trade initiative originated in the World Trade Organisation and has resulted in programmes that have bettered the lives of many men and women in developing countries.   I find this particularly interesting in my role as Minister for Trade and Development in Ireland, which involves trade promotion as well as development cooperation.

Developing countries are changing – stronger economies, better education and technology are driving change, including political and economic change.   Development aid has served developing countries well.   It has provided many countries with models and resources to develop their own democratic structures, more accountable government, organise transparent elections and, in many cases, support and promote the role of a vibrant civil society.

Development assistance has also supported many basic social services including better education and health.   However, there are still long term needs in many countries, especially Least-Developed Countries and fragile states.

Development assistance alone will not address these needs – lasting solutions will need to be underpinned by increased local economic activity which will lead to domestic resource mobilization, foreign direct investment, more regional cooperation, greater integration into world markets and more two-way trade with the rest of the world.

It was in this context that last year the Irish Department of Foreign Affairs and Trade launched a new Africa Strategy.   The Strategy calls for a broader engagement with Africa that builds on our development cooperation work and which includes deeper political relations and the promotion of mutually beneficial trade and investment.   The Strategy has seen a strengthened mandate on trade and investment for Irish Embassies in Africa and an expansion of Irish Aid’s role in improved business environments, including private sector development activities.

I have held many discussions with African Governments and business people over the last year.   Their consistent message is that Africa is open for business and that there has been substantial economic development in Africa in recent years which is predicted to continue into the future.

There are challenges however.   Only 10% of African trade goes to neighbouring countries compared with 60% of EU trade being within the EU.   Supporting regional integration is one of the objectives of the Economic Partnership Agreements being negotiated between the EU and several African countries.   Ireland, as President of Council of EU until the end of June, is seeking to support these negotiations.

Many developing countries face a range of supply-side and trade-related infrastructure obstacles which constrain their ability to engage in international trade.   Your discussions this morning will be focusing on two important issues – how to reduce the thickness of borders and how to adapt to changing production patterns.

In the afternoon, I am pleased to note the dedicated session on how to engage the private sector.   It is very welcome that for the first time the private sector has been directly targeted in the OECD/WTO monitoring exercise in the lead up to the 4th Global Review of Aid for Trade.

I see great potential for the private sector to advance the trade capacity building agenda.    In South Africa, Irish companies are employing over fifteen thousand local people, creating much needed jobs and providing the opportunity for these workers to contribute to the development of their country.   In Nigeria, one Irish construction company employs over five thousand people and over ten thousand in the wider West African region.

In Uganda, Traidlinks – an Irish not-for-profit company, established by Irish Aid, implements a business mentoring and a regional export promotion    programme and supports business to business links between Ireland and Uganda.

Last year, in a joint initiative with the Department of Agriculture, Food and the Marine, my Department launched the Africa Agri-Food Development Fund.   The purpose of this initiative is to bring the management skills and research capabilities of the Irish agri-business and States Agencies to the two countries being piloted under the scheme – Kenya and Tanzania.  This initiative also resulted in a number of the major agri-food companies from Ireland visiting East Africa to look at market opportunities with a view to possible investment in the future.

The potential for Africa to feed itself must be fully realised against the realities of growing population and the adverse effects of climate change.   In Ireland we believe that it is necessary to develop a functioning agri-food sector that links producers with processors to meet local market needs, to eliminate waste and to add value.   In Lagos State, in Nigeria, over 5,000 cattle are consumed daily.  All of this meat is consumed fresh and none is processed into higher value goods which would meet growing demands across the city, reduce dependence on imports and result in higher prices for producers locally.

The 2010 African Development Report highlighted the importance of ports in Africa for trade.   In response, Irish Aid decided to support the United Nations Conference on Trade and Development’s Train for Trade Port Training Programme for Port Communities in Ghana, Indonesia, Malaysia, The Maldives, Namibia and Tanzania.  This programme is being run in cooperation with Dublin Port Company, the Port of Cork and Belfast Harbours and Commissioners.

Last November, I visited Tema Port in Ghana and met with senior management.   I saw how the partnership with Irish ports has already developed a cadre of middle managers who are contributing to the development of good functioning port facilities in Tema and Takaradi ports in Ghana.   I believe there are many positive lessons which we can learn from this experience and we are in discussion with the authorities in Ghana regarding a lesson learning event in Dublin in 2013.

The Africa Strategy acknowledges that, as Africa develops and changes, Ireland needs to recognise a maturing of its relations with Africa and with individual African countries.   The Strategy recognises the fact that the leaders of many African countries and businesses are keen to foster opportunities for expanded trade and investment ties in the future, and to move towards a situation where Africa reduces its dependency on aid.

At the second Africa Ireland Economic Forum in Dublin last October, we brought together 250 people to discuss trade and investment with the continent.   This included the champions of Irish business as well as Small and Medium Enterprises who develop products for the export market.

Together with representatives from 23 African countries, we continue to identify meaningful opportunities for Irish business to meet the needs of developing countries, to seek opportunities for investment and to create much needed employment.   I am heartened by the interest being shown by the Irish private sector in these initiatives.

In Vietnam we support the training of executives in Vietnamese business on such areas as trade promotion and strategic planning.   We do this within the framework of the Irish Development Experience and Sharing Programme, in conjunction with the Vietnam Chamber of Commerce and Industry and Enterprise Ireland, the Irish government organisation responsible for the development and growth of Irish enterprises in world markets.    Up to 100 business staff have been trained annually.

Irish Aid has also contributed to the Mekong Private Sector Development Facility which is a trust fund for the International Finance Corporation’s Advisory Services programme in the Mekong sub-region.   The broad objective is to contribute to sustainable growth and poverty reduction of Vietnam, Cambodia and Lao PDR by supporting the development of a dynamic private sector.

Through a grant to the Better Work Vietnam Programme Irish Aid has facilitated the improvement in compliance with international labour standards and promotes competitiveness in Vietnam’s clothing industry.   To date Better Work Vietnam has reached 150 factories, with a total of 154,657 workers, of which 123,807 are women.

Irish Aid has just recently committed a grant to the Second Trade Development Facility in Lao People’s Democratic Republic together with other donors such as the EU, Germany, Australia and the World Bank.  This programme forms part of a successful and growing aid for trade program in Lao PDR focused on trade facilitation reforms for non-customs agencies, laying the foundations for a Lao National Single Window; core support to WTO accession negotiations; as well broader support to trade related research, aid-for-trade management and investments to build competitiveness in key priority sectors.

I know that these types of initiatives are mirrored in other countries.   Ireland is a core supporter of the Investment Climate Facility based in Dar es Salaam.  The IFC is supported by public and private funds steered by a Board of private sector leaders familiar with investment constraints across Africa.  I hope the discussions later today will result in the sharing of information and lessons learned on positive projects such as these.

The discussions over these two days will feed into the 4th Global Review of Aid for Trade which will take place in Geneva next July.   Ireland as President of the Council of the European Union until the end of June will support EU preparations for the Review.

The first Global Review in 2007 helped consolidate political support around the concept of mainstreaming trade into national development policies and programmes.   The 2009 Review showed how developing countries and donors were making progress in implementing this approach.   It also highlighted a continued momentum in the mobilisation of resources.

The third, in 2011 focused on showing and assessing results and impacts of Aid for Trade.

This theme for the 4th review reflects the fact that the expansion of value chains is offering new opportunities for some developing countries, yet many others remain on the margins of global trade or locked into supplying a narrow range of goods and services.

I note that the final session today will look at Where next with Aid for Trade?   I feel that we need to keep up the momentum on the basics of Aid for Trade - mainstreaming trade into national development policies and programmes; having donors and partner countries working in partnership to boost trade in local, regional and global markets; and continuing to show and assess results.   We also need to ensure that Aid for Trade is adapting to market realities – hence the value of the theme ‘Connecting to Value Chains’ for the 4th Review.

I also see potential for policy development of Aid for Trade whereby the lessons we learn in Aid for Trade implementation can feed into wider trade policy.    Promoting trade and investment is crucial to realising the economic development needed to alleviate global poverty.    A post-2015 framework must address the issue of how to improve the trade and investment climate in developing countries in order to encourage responsible investment and promote the creation of sustainable employment. Expanding trade and investment capabilities and opportunities is key to increasing the income and living standards of developing countries.

Ireland supports the ongoing efforts to progress a package for delivery at the 9th WTO Ministerial meeting to be held in Bali in December.

We want to see a successful Ministerial which delivers on the development mandate of the Doha Development Agenda and helps to secure the WTO and the rules based multilateral trading system.   This is essential to the delivery of effective Aid for Trade.   Furthermore our Aid for Trade work contributes to this mandate.     Hopefully our discussions today will contribute to the hoped for positive outcome in December.