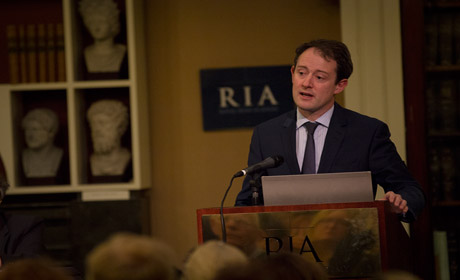 Speech for Minister of State Sherlock

‘Moving Beyond Fear: Prioritising the Safety of Women and Girls in Societies’,

Ladies and Gentlemen, I would like to begin by thanking the Irish Consortium on Gender Based Violence for inviting me to address you today on the occasion of its Annual Seminar. It is a great honour to follow our keynote speakers, each of whom have, through their words this morning and through their daily efforts, displayed a truly extraordinary commitment to combating the scourge of gender-based violence.

I am delighted to reaffirm today the continued commitment of Department of Foreign Affairs and Trade to the Irish Consortium on Gender Based Violence. The Consortium, bringing together, as it does, Irish humanitarian and development organisations and the Defence Forces, provides Ireland with a unique and powerful voice on the global stage in advocating for the elimination of gender-based violence. Equally, the Consortium provides its members with an invaluable platform to share experiences and build their capacity to effectively combat to gender-based violence.

Preventing and responding to gender-based violence is a key priority of Ireland’s programme for overseas development, and is at the core of our work to promote gender equality and women’s empowerment.  As set out in the Government’s Policy on International Development, One World, One Future, we regard gender-based violence as a major abuse of human rights which undermines women’s well-being and livelihoods.

As women and girls are particularly vulnerable to such violence in emergency situations, Irish Aid prioritises the protection of women and girls in its response to humanitarian emergencies. Just last month, during my visit to Ethiopia, I visited the Gambella region which has seen a deluge of more than 200,000 refugees fleeing from the neighbouring South Sudan. I was struck by the fact that the vast majority (92%) of the refugees arriving to these camps were women and children, many of whom had experienced gender-based violence while fleeing their homes.

In light of the vulnerability of the women and children in these camps, a member of Ireland’s Rapid Response Corps will be deployed to work as a Protection Officer, to increase safety through gender-based violence risk mitigation. During my visit, I also announced that the Government is to provide an additional €2 million to meet the urgent needs of these extremely vulnerable refugees in Gambella, bringing Irish Aid’s commitment to the South Sudan crisis to over €8.5 million to date in 2014.

Recognising that women and children continue to be uniquely and disproportionately impacted by conflict, the Department of Foreign Affairs and Trade is currently leading the process of developing Ireland’s second National Action Plan on Women, Peace and Security. In light of our proud tradition of active involvement in humanitarian assistance and peacekeeping, and given our unique experience of conflict resolution in Northern Ireland, this is an area in which Ireland is viewed as a global leader.  The new Action Plan, which will be launched early in the New Year, will recommit the relevant Government Departments and Bodies to the crucially important Women, Peace and Security agenda.

Irish Aid is playing an active role in policy development, funding and research to increase survivors’ access to justice through both legal reform and through changing social attitudes towards gender-based violence.

Irish Aid is also supporting the UN Women administered Trust Fund to End Violence Against Women.  This unique grant-making mechanism supports CSOs and UN country teams to expand survivors’ access to key legal, psychosocial and health care services.   One example of a partner supported was Physicians for Human Rights, an organisation which developed a medical and legal system for managing forensic evidence in rape cases in the Democratic Republic of the Congo, the Central African Republic, Kenya, Sudan and Uganda.

In addition to supporting interventions at the country-level, Ireland also works at the global level to advocate for an end to gender-based violence and to increase awareness of the causes and consequences of such violence. This is critical, particularly as we now focus our efforts to agree on a new Post 2015 sustainable development agenda.

In the deliberations of the Open Working Group on Sustainable Development Goals earlier this year, Ireland has been a leading voice in calling for an ambitious goal on gender equality as well as its effective mainstreaming across all other goals, target and indicators. As gender-based violence continues to be the most pervasive yet least recognised of all human rights abuses, we need to ensure that it remains a focus of the Post 2015 agenda.

Of course, we cannot forget that violence against women is also a pervasive problem here in Ireland. It is a challenge, however, that this Government is committed to tackling. Last month, my colleague Frances Fitzgerald T.D., Minister for Justice and Equality opened a Consultation Forum for the development of Ireland’s new National Strategy on Domestic, Sexual and Gender-based Violence. This complimented by national awareness campaigns on domestic and sexual violence, including those specifically highlighting men’s important role in eradicating such violence and in supporting survivors.