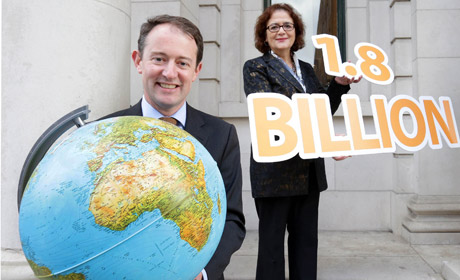 I am delighted to be here today and to launch this year’s State of World Population Report from the United Nations Population Fund, UNFPA. I wish to thank the Irish Family Planning Association for hosting this important event and the All Party Oireachtas Interest Group on Sexual and Reproductive Health and Rights and Development for their involvement.

My special thanks go to Dr Mona Kaidbey from UNFPA. UNFPA’s work is closely aligned with many of the priority areas identified in Ireland’s Policy for International Development ‘One World, One Future’. The area of hunger is closely linked to population and fertility issues while human rights, gender equality, young people, and reproductive health also feature strongly as mutual priorities.

For these reasons Ireland places a high priority on our partnership with UNFPA, and in spite of budget cutbacks elsewhere in recent years, we have prioritised our level of core funding to UNFPA which amounted to €3.1 million this year. In total we have provided some €15.35 million in core funding since 2010.

Our level of core funding to UNFPA amounted fo €3.1 million this year.

In 2013 Ireland was elected to the Executive Board for UNDP and UNFPA and during 2014 we served as Vice President of the Board. We have used our membership of the Board to work closely with UNFPA on its new Strategic Plan which focuses on the role of on women and youth  in realising the objectives which the international community agreed to 20 years ago at the International Conference on Population and Development (ICPD).

We have also been vocal supporters of UNFPA’s crucial role in ensuring that last September’s UN General Assembly Special Session on the ICPD was a success.

We were very pleased that the outcome from the Special Session reinforced a renewed consensus and global commitment to ensure that the principles of the ICPD, including its emphasis on the right of all individuals to sexual and reproductive health, remain at the core of any future development agenda. Anything less would have constituted a draconian setback for the lives of women and youth across the world.

The State of World Population Report

Turning to the report being launched here today, I think that we all can agree with the young contributing editor, Ms Irem Tumer, that this year’s report is significant because it emphasises that investments in young people benefit not only  young people themselves, but are also critical for sustainable development.  Indeed the report regards the unprecedented high proportion of youth in the world today, not as a challenge, but as an opportunity for the entire global population.

One key message of the report is that with the right policies and investments, all countries – whether already at the stage, or about to enter that stage when both mortality rates and fertility rates are falling - can achieve a ‘demographic dividend’. With a larger working population and fewer dependents, developing countries will have a one-time opportunity for rapid economic and inclusive growth.

Ireland is determined that our programme of development cooperation works to maximise the potential of young people through our support to education, especially girls education, to health services including reproductive health and tackling HIV/AIDS, and through our support to agriculture which is the main livelihood for young people in rural areas.

I find the focus on youth in this year’s report particularly timely. As we plan for the next 15 year framework to replace the MDGs we must be conscious that a 10 year old child will be 25 years old in 2030.

The Millennium Development Goals have served as a catalyst to remarkable progress in many areas including health, education, and gender equality.  They have also left us a clear picture of the areas where we need to do more, including tackling maternal mortality.

Our successes, as well as our failures, must now inspire the international community to work towards a new global framework for international development – the so called ‘Post-2015 Development Agenda’.

Many would agree that the Post-2015 Development Agenda should address the priorities, agreed to at the Special Session on the ICPD last September. In the context of Post-2015, there is broad support towards prioritising infants and young children as well as focusing on the needs of the elderly, the disabled and other vulnerable groups. It is also widely recognised that unless the goals and targets specifically takes account of the needs of adolescents and youth, the framework will miss the key demographic which has the potential and the power to ensure a more just and sustainable world for all people.

The emphasis in this year’s State of World Population Report on this unprecedented opportunity for the international community to help to make the ‘demographic dividend’ become achievable in the Global South, is important and timely as we head into the final stages of agreeing to the Post-2015 Development Agenda.

In the context of the development of the Post-2015 Agenda, Ireland supports the importance of ‘listening’ to the priorities of our young people for what will be their future as well as ours.

Ireland has played and will continue to play a key role in the Post-2015 process both at the European Union and at the United Nations. Recently Ireland’s Ambassador to the UN, together with his counterpart from Kenya, were appointed to co- facilitate the final phase of intergovernmental negotiations. This is a great honour and responsibility for Ireland and we are fully committed to facilitating the most ambitious possible consensus in order to ensure a successful outcome at next years’ high-level summit.

While it is important to be forward-looking and optimistic about the future, we must not lose focus from today’s immediate challenges. Since the launch of last year’s report the world has witnessed the spread of ebola in West Africa and beyond which so far has claimed nearly 5,000 fatalities with many more unaccounted for.

During my recent visit to Sierra Leone I was impressed to see at first hand, the heroic work being carried out by the international community – both governmental and non-governmental - and not least by the Irish Embassy as one of the few resident donors. Unfortunately ebola will now be the defining trauma for a generation of young people in Sierra Leone and other effected countries.

The UNFPA in particular has taken a lead role in providing ‘contact tracing’ to identify and treat those most at risk from the virus.

While much of the media attention to date has focused on stopping the spread of ebola there is already a longer term crisis. From the perspective of Ireland, and no doubt UNFPA, the impact on maternal health services is a primary concern, as is the issue of food security.

Irish Aid has therefore provided funding for UNFPA to conduct a rapid assessment of the impact of ebola on reproductive health services and service seeking behaviour in Sierra Leone. It will help to inform strategies to minimise the very serious secondary impacts of ebola.

To date Ireland has in total provided direct funding of almost €2.5 million to organisations working on the ebola response.

This year’s State of the World Population report has highlighted the potential of the world’s 1.8 billion youth and adolescents to transform the future. This recognition is particularly timely as the world embarks on the final steps to agree a new global development framework to 2030.

With your support the Irish Government is determined to do all we can to ensure that the Post 2015 generation of young people have a brighter future and I want to thank everyone in the room for their support in this regard.

And in conclusion let me specifically thank Mona and UNFPA, Deputy Mitchell, and the All Party Oireachtas Interest Group and Niall and the Irish Family Planning Association for inviting me to participate in today’s launch.