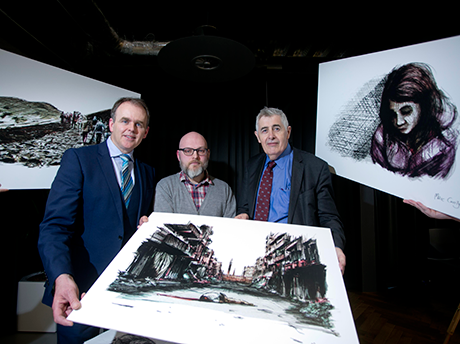 Thank you to Sinéad and Dominic for the welcome. And thank you for inviting me here today to launch this important report.

It seems very appropriate that we are here at the centre of Twitter’s operations for Europe, the Middle East and Africa. As Sinéad has highlighted, social media, like all media, plays such an important role in communicating the human impact of crises that are taking place not so far from home.

While I am pleased that I can be here today, I am mindful that it is a sobering occasion, marking almost six years of devastating conflict in Syria, a conflict that has led to the loss of hundreds of thousands of Syrian lives, and forced over half the population to leave their homes.

It is particularly poignant for me to be here just days after undertaking my first official visit to Lebanon and Jordan, where I heard directly from the Syrian people and witnessed first-hand the impact of Ireland’s humanitarian support. I can tell you that it was a deeply impactful experience.

There is so much that I was struck by - but let me reflect on a few key points:

Firstly, the single most important asset of the Syrians I met in Jordan and Lebanon was safety.  To know that when their children went to sleep at night - even in a tented settlement instead of in the homes they left behind - that they wouldn't be woken by the sound of bombing, that they wouldn't be gripped by the fear that has now become a constant for those stuck inside Syria; this is what they treasured most.

Secondly, the generosity of the communities in Jordan and Lebanon that have welcomed Syrians into their homes.   The attention of the Western media has been on the numbers of refugees arriving in Europe. But as highlighted in the report we are launching here today, just a tiny percentage of Syrian refugees make their way to Europe. 14 of every 15 Syrians that have been forced to leave their homes have remained in the region. And one thing was abundantly clear to me when speaking to those in Lebanon and Jordan: this is where they want to be. Any Syrian I spoke to had one ultimate aim: to return home.

Thirdly, I was struck not only by the capacities and resilience of refugees and host communities with whom I met, but also by the hope that they collectively shared about returning home. I met people who wanted to return to their businesses in Syria; farmers who wanted to get back to their fields to plant potatoes for export to Europe; young adults who had been forced to abandon their university education who wanted to resume studies; a fourteen year old boy whose only dream was to get home. These are the stories of real people.

Finally, I was struck by Ireland’s footprint in the region. Be it through our peacekeepers in Southern Lebanon, our UN funded partners in refugee camps, or our NGO partners such as Trócaire and Concern, who are working to ensure the protection of Syrian refugees and their access to services essential to their survival and well-being. Seeing how our nation’s values are being represented in the Middle East was a real privilege for me. We have reason to be proud, ladies and gentlemen, of the efforts of our partners and our compatriots, in supporting communities in Lebanon and Jordan to feel safer, to re-establish their livelihoods, to return to education, or to deal with the trauma of what they have experienced.

But I also returned with the strong feeling that we can do more and we need to continue to think outside the box to address the real needs and foster the dreams of those that are waiting to someday return home.

That is why I am so pleased to be here today to lend my support to the launch of this important and insightful report, which is a critical element of Concern’s response to the Syria crisis.

“Shattered Lives” has been uniquely informed by the personal experiences of the Syrian refugees with whom Concern works and uses these experiences to advocate for a political and diplomatic commitment to a resolution of the conflict, for unhindered humanitarian access, for the respect of international humanitarian law, and for increased funding for humanitarian protection; all critical priorities, echoing Ireland’s own approach.

The search for a peaceful resolution of the Syrian conflict remains a top foreign policy priority for Ireland. The renewal of the Geneva negotiations is a vital opportunity for all sides to demonstrate their commitment to UN resolution 2254. We continue to urge all sides to work for a political transition, an end to violence, the lifting of all sieges and barriers to humanitarian relief, and for accountability for the atrocities and crimes committed against the Syrian people. The Government of Ireland’s concerns have been conveyed to relevant authorities both directly and at EU level and we will continue to advocate for humanitarian access and the respect of international humanitarian law.

Ireland’s own approach to furthering international peace and security is multifaceted. It encompasses conflict prevention, resolution, mediation and peacebuilding efforts. As a nation that has lived and suffered the effects of conflict, we have accumulated experiences and knowledge through the process of peace and reconciliation on the island of Ireland that inform our approach. In the past 12 months alone, we have engaged in lesson sharing from Northern Ireland in the context of conflicts and peace processes in Colombia, Ukraine, Turkey and the Middle East.

We hope that, when the time is right, Ireland’s experience, lessons and approach to conflict resolution and peacebuilding can be tailored to support the peaceful recovery of a post-conflict Syria.

Not forgetting that today is International Women's Day, I want to recall some of the women I met with last week. I was struck by the number of single women caring for their families alone, having lost husbands, brothers and, in some cases, sons in the conflict. I heard the stories of young women and girls who had been forced to leave their education in support of their families, and of early marriage being used as a coping mechanism.

Gender equality, women’s empowerment and the elimination of gender-based violence are top priorities for the Irish Aid programme. Our efforts to address the particular needs of vulnerabilities of women and girls through our humanitarian actions are far-reaching. We must stay focused on these efforts.  Women and children today make up 75% of those affected by crisis.

Last week, when I travelled with Dominic to Mhammaret in northern Lebanon, where Concern is works with Syrian refugees living in informal settlements, I saw for myself the impact of humanitarian projects focused on protection. I was particularly impressed with the innovative work of Concern where they engage men and boys on the reduction of gender-based violence, and provide essential psychosocial support to adults and children who are dealing with staggering levels of trauma and distress. This experience convinced me that the prevention, mitigation and response to all forms of violence, but particularly gender-based violence, in emergencies is in itself a life-saving action and should be an essential part of every humanitarian operation. This is Ireland’s policy and we intend to continue to implement it.

Ireland’s humanitarian response to the conflict in Syria is our largest ever. We have provided more than €70 million in support of Syrian people affected by the conflict since 2012. Our funding seeks to meet the needs of the most vulnerable people inside Syria and those who have been displaced in the region. It is delivered on the ground by our NGO, UN, and Red Cross and Red Crescent partners.

Concern is a long-standing and valued partner in the delivery of Ireland’s humanitarian and development assistance, and has from the outset been a key player in the Syria response. I commend Concern’s role, your approach and the impact of your work. I particularly commend what you have achieved in producing this report.

I am regularly asked to respond to questions about Ireland’s response to the conflict in Syria. I know only too well that when we are dealing with a crisis of this magnitude, we can lose sight of what lies behind the figures. I often reference the devastating statistics of hundreds of thousands people who have been killed, millions who have been forced from their homes, billions of euro worth of infrastructure destroyed. But too often, we can forget the human faces behind these statistics.

Last week, I had my own opportunity to fully grasp the human face of this crisis. But this report gives all of us an opportunity to do that: to encounter the grandparents, parents, children and young people who have left their homes, communities and livelihoods behind them in ruins in order to survive; to hear their stories, and to understand their worries and needs.  The report gives us crucial insights into the lives of Syrians who have been displaced by violence; crucial both to our awareness of the situation, and to how we formulate our response.

I can assure you that the Irish Government will maintain our support, our solidarity and commitment to meeting the humanitarian needs of the most vulnerable Syrians. We will continue to advocate for a peaceful solution to the conflict, for unhindered humanitarian access and for the respect of international humanitarian law, at every opportunity available to us, until a resolution to this conflict is achieved.