Read the outcome document from the Special Event on the MDGs. 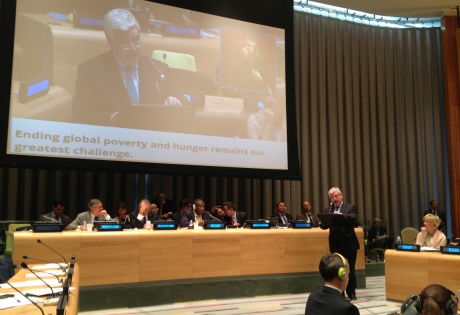 The week of 23rd September was a busy one for Ireland at the UN in New York and Geneva. In New York, world leaders gathered for the annual United Nations General Assembly meeting and in Geneva, two important new resolutions put forward by Ireland were accepted by the UN Human Rights Council.

Alongside the 68th Session of the General Assembly, countries gathered in a Special Event on the Millennium Development Goals, recognising that the single greatest global challenge remains the fight against poverty and hunger. With just a little over two years left to the 2015 end date, world leaders agreed to build on progress made and redouble efforts to achieve all the Goals. Discussions are also already underway amongst countries on how best to build on the progress made. Ireland, together with South Africa, was proud to facilitate the meeting and help reach a consensus that both poverty eradication and sustainable development need to be taken into account in any new set of goals and a balance reached between social, economic and environmental development. Agreement was also reached on how these important negotiations will proceed in the months ahead.

"I am convinced that the principles of equality, inclusion and fundamental human rights must be at the core of this work."

Speaking in New York at the MDGs meeting, Tánaiste Eamon Gilmore said “I am convinced that the principles of equality, inclusion and fundamental human rights must be at the core of this work. And we cannot ignore the particular development challenges facing countries and communities beset by conflict and violence.”

Amongst Ireland’s efforts to tackle poverty and hunger and help reach these Goals, is our commitment to improving nutrition. Nearly half of all child deaths under 5 are as a result of malnutrition. In recognition of the vital role of good nutrition in development, while attending the UN General Assembly, Minister Joe Costello pledged a further €3 million from Ireland for mother and child nutrition and together with the US called on the global community to renew efforts to scale up nutrition over the next 1000 days to 2016.

Read the outcome document from the Special Event on the MDGs.