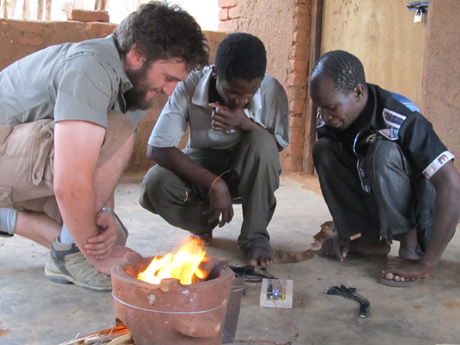 Irish Aid has funded the development by Trinity College Dublin of a thermoelectric generator attached to a clay cookstove that uses heat to provide electricity for charging mobile phones and powering lights or radios.

The prototype technology aims to provide a low cost energy solution for millions in Africa who do not have access to grid electricity.

In Malawi, only 9% of people have access to electricity and most use wood burning stoves to prepare meals.

The idea for the stove was simple: use the heat produced during normal cooking to develop a low-cost technology capable of generating small amounts of electricity. Since 2011, the technology has been extensively field tested in Malawi in collaboration with Irish NGO Concern Universal. The prototype device is now in small scale use across 100 households.

Initial field trials revealed that if it was to become a viable and sustainable technology, the stove had to be low-cost, low-maintenance, easily repairable and made close to market where possible.

The stove is therefore made of simple materials and uses open source technology, which allows it to be manufactured and assembled locally using local craftspeople at low prices.

Researchers designed the generator to be used with low-cost energy-efficient wood-burning cookstoves produced and sold by women’s groups in rural Malawi. These cookstoves are more efficient and use 40% less wood than conventional stoves, reducing deforestation and the time needed to collect firewood.

Tests showed that over three one-hour cooking periods, the stove was capable of generating and storing 8 watt hours of electricity, enough to charge a phone and an LED lantern.

Devising a technology for the developing world that is inexpensive and sustainable is the big challenge, but with research and development anything is possible.

More information on the project

Check out this video on the development of the stoves in Malawi.

Learn more about our work in Malawi, our Country Climate Action Report for Malawi, and the work of Irish Aid in tackling climate change

This article is part of a Climate Action series focusing on the work of Irish Aid to help poor communities tackle the effects of climate change, published as the UN Climate Conference takes place in Paris.