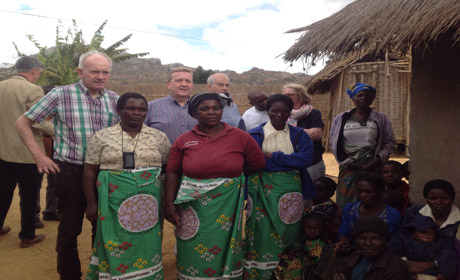 Members of the Oireachtas Joint Committee on Foreign Affairs and Trade (JCFAT) visited Malawi this week to review the impact of Ireland’s aid programme in the country.

The visit is part of Irish Aid’s commitment to having robust scrutiny of the aid programme, and builds on the recent review of the Malawi programme by the OECD’s Development Assistance Committee. The delegation was headed by Chairman of the JCFAT, Pat Breen, and included two other members, Dan Neville, T.D. and Senator Jim Walsh.

The committee members visited a range of Irish Aid programmes across Malawi, witnessing how Irish Aid is empowering thousands of Malawians to overcome poverty and malnutrition.

The committee members visited a range of Irish Aid programmes across Malawi, witnessing how Irish Aid is empowering thousands of Malawians to overcome poverty and malnutrition. Their visit also provided the opportunity to meet with senior Malawian government officials, including Vice President Chilima.

In central Malawi, the JCFAT delegation met with women farmers in Dedza who are part of an Irish Aid supported farmer seed multiplication group. The women’s group has successfully multiplied potatoes using new technology supplied by the International Potato Centre, and passed on the improved varieties to their local community. The

Committee also met Mr Chimpikiso – a seed multiplier under this programme five years ago – who has now built an impressive business selling seed potatoes throughout Malawi and into neighbouring Mozambique. The Irish Potato Project has helped 16,000 people in four districts. Over 90% of these reported that the project had helped them to improve their food intake and nutrition.

Committee members also visited a community in Golomoti that has benefited from the Enhancing Community Resilience Programme (ECRP).  The community has built a 17 hectare irrigated scheme through the programme, which allows them to get two to three harvests per year instead of one, and to cope with unpredictable weather patterns caused by climate change. With funding from Irish Aid and other donors, the ECRP supports the poorest communities in Malawi to build their resilience, and has led to significant increases in household income for more than 69,000 households. 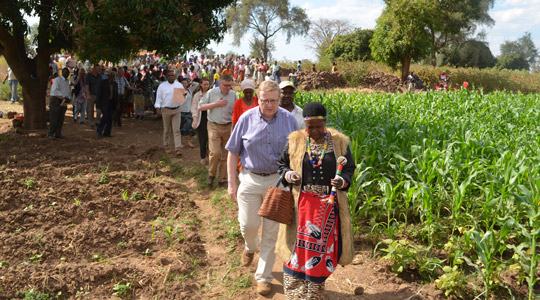 In Salima District, the Committee members met with a Community Rights Committee (CRC) and Radio Listening Club.  The group operates like a mini parliament at local level with spokespersons on health, education, agriculture, infrastructure, and the environment, among other topics. There is also a Radio Listening Club which allows them to raise and address grievances through the forum of local and national radio. The project is part of Irish Aid’s investment in the Democracy Consolidation Programme (DCP), which establishes community groups across Malawi and empowers them to become aware of and demand their rights from local and national government.

Finally, Committee members met with the Vice President of the Republic of Malawi, Saulos Chilima, and key figures in the Malawian government, including the Principal Secretary for Disaster Management Affairs and former Ambassador to Ireland, Bernard Sande; Speaker of Malawi National Assembly, Richard Msowoya; and parliamentarians from the Committee on International Relations. The meetings provided a valuable opportunity to discuss the Malawian government’s vision and priorities for the future, and for Committee members to underline the importance Ireland attaches to strong financial oversight of funding allocated through the Irish Aid programme.

The Committee’s itinerary continues in South Africa for two further days, where they will view Irish Aid programmes supporting women’s empowerment, as well as build on key trade, tourism and business relationships between Ireland and South Africa.