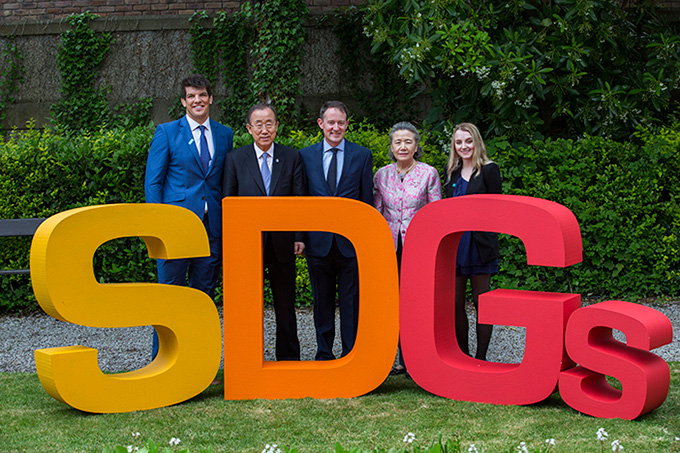 193 countries will commit to the Sustainable Development Goals at a UN Summit in New York.

The massive UN Summit sees world leaders committing to 17 Goals, known as the Sustainable Development Goals. The Goals aim to end poverty, reduce inequality and tackle climate change by 2030. They are backed up by 169 targets, ensuring the level of ambition in the Goals is matched by detailed planning and the ability to monitor progress.

Ireland has played a very unique and central role in the process to agree these Goals. In 2014, Ireland’s UN Ambassador, David Donoghue, was appointed to co-chair (with Kenya) the final intergovernmental negotiations. Throughout 2015, Ireland and Kenya brought together all UN member states, civil society, and the private sector in a series of formal negotiating sessions and informal consultations. On 2nd August 2015, agreement was finally reached.

The significance of these Goals is immense.  Never before have the world’s countries come together to agree such a comprehensive agenda. It has been compared to that critical moment, seventy years ago, when the United Nations was created from the ashes of war and division.

The Taoiseach is delivering Ireland’s national statement to the UN Summit today, outlining the critical need for such Goals, and Ireland’s commitment to achieving them. President Higgins is also addressing several key meetings at the Summit – on sustainable economic growth, tackling global hunger and supporting gender equality.

Minister Sherlock will attend the Opening of the Summit, including the address by His Holiness Pope Francis; meet with EU Development Ministers on the new Goals, and launch a new Ebola Innovation Task Force. President Higgins and Minister Sherlock are also meeting the team at Ireland’s Permanent Mission to the UN, who have supported negotiations throughout 2015.