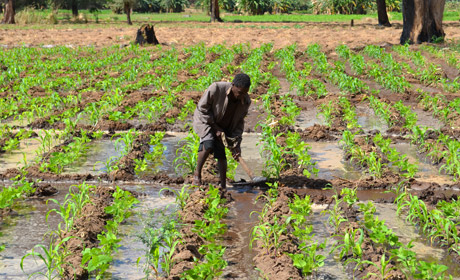 A farmer working on one of the ECRP funded irrigated fields in Dezda district, Malawi

Irish Aid is one of the co-funding partners with the UK and Norway to a special programme in Malawi that aims to build resilience in drought and flood prone communities – by helping people help themselves through initiatives such as micro credit, agriculture training and low carbon technologies.

The programme - Enhancing Community Resilience to Climate Change and Variability (ECRP) - was designed to provide support to people in vulnerable communities across 11 districts (in selected Traditional Authorities) in Malawi, to manage, cope and recover from the impact of climate variability and to give them a voice in decisions affecting them.

The €32.4 million funded ECRP - from 2010 to 2017 - supports initiatives for up to 1.4 million Malawians, such as Village Savings and Loan Schemes (VSLs), conservation agriculture techniques, drought resistant crops, irrigation, livestock, fuel efficient cookstoves, afforestation and solar lighting. It also supports district and national planning for disaster risk reduction and climate adaptation.
Joyce Amos from Chikwawa district received money after participating in a VSL club for a year. She used the money to buy a cow which now has two calves. She now has 3 cows, which gives her greater resilience against poverty.

T.A. Ngowe from the same district underlined the importance of the ECRP: “The best thing about this programme is the knowledge of agricultural techniques such as conservation agriculture. If the programme ended today, I would continue to use the knowledge.”

The overall aim is poverty reduction, increased food security and more secure livelihoods for vulnerable Malawians, by moving away from a dependency on repeated humanitarian assistance. The programme also seeks to influence Government policies, programmes and plans, through the implementation of local early warning systems and disaster response plans.

The VSLs in particular are seen as a catalyst that can lead people out of poverty, as the savings and loan schemes have allowed individuals the means to buy livestock and drought resistant crops.
The ECRP is managed by Irish Aid’s UK counterparts (DFID) through two NGO consortia: Concern Universal and Christian Aid, who lead the NGOs who are working with communities on the ground, as well as district government and agriculture officials. In conjunction with DFID, Irish Aid undertakes field visits and joint monitoring of programme activities.

Find out more about Irish Aid’s work in Malawi