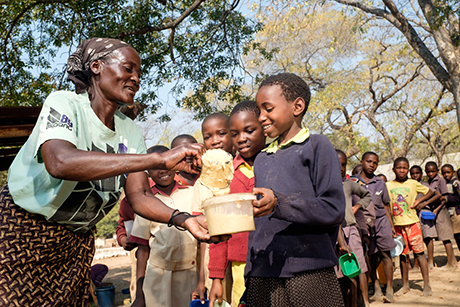 During the Zimbabwe food crisis, a local volunteer cooks and hands out porridge to Surprise (age 10) at a village school where 150kg of healthy corn-soya blend is provided by NGO partners each day. 28/07/16 Photo Credit: Trócaire

How does the Fund work?

The scheme is particularly geared towards the initial weeks after the onset of an emergency and targets those in immediate need.

At the beginning of each year, Irish Aid pre-positions a defined amount of funding with long-standing partner NGOs. With approval from Irish Aid, NGOs can access these standby funds to respond quickly after an emergency occurs, or when a protracted humanitarian situation suddenly deteriorates. It allows time for a rapid assessment of need and speedy planning to ensure appropriate responses.

Over the last decade, Irish Aid’s partners have carried out more than 150 humanitarian responses to emergencies in over 40 countries, through ERFS support. Here we take a look back at how they responded to five of the most significant crises of the past decade.

On January 12, a 7 Magnitude earthquake caused massive destruction and loss of life in Haiti, with death-toll estimates ranging from 100,000 to 160,000 people. ERFS partner Concern Worldwide immediately began rolling out safe drinking water and hygiene facilities to those whose homes had been destroyed, while GOAL carried out an emergency response to a cholera outbreak in Port-au-Prince and implemented a Cash for Work programme to support local livelihoods, recovery and reconstruction.

The Category 5 Super Typhoon Bopha, known locally as Typhoon Pablo, cut across the Philippines in December and devastated many areas, causing destruction of property and affecting over 6 million people. Emergency responses followed from Christian Aid Ireland, who provided immediate food, shelter, non-food items and emergency cash assistance to poor and vulnerable families. Plan International Ireland was supported to distribute water and hygiene kits in a number of communities.

Reflecting on 10 years of the Emergency Response Fund Scheme, Joe McHugh T.D., Minister of State for the Diaspora and International Development, stated:

“The ERFS scheme is a critical component of Ireland’s global humanitarian assistance, allowing for rapid, life-saving and life-sustaining responses to situations of devastating crisis. Working with trusted partners, who are best-placed to respond, enables Ireland to meet critical humanitarian needs in countries where we may not ourselves have a presence on the ground. I applaud the continued essential work of our partners in humanitarian action and their role in delivering on Ireland’s values and objectives of a just and sustainable world”.

Irish Aid also responded to these and other crises with complementary funding schemes, such as the Humanitarian Programme Plan (for situations of protracted crisis), the Rapid Response Initiative (by deploying emergency personnel and supplies), Calls for Proposals (for sudden onset emergencies), support to the Start Fund (for immediate response to smaller-scale, under-the-radar emergencies) and our programmes of bilateral assistance, such as in Sierra Leone during the Ebola crisis.

Find out more about ERFS.