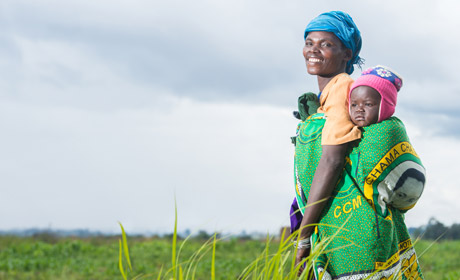 A core priority of Irish Aid is the prevention of and response to gender-based violence.

March 8th marks International Women’s Day, the day dedicated to promoting global awareness of gender equality and the empowerment of women and girls. This year’s International Women’s Day is the first since the agreement was reached,  last September, of the 2030 Agenda for Sustainable Development, a new global framework setting out 17 Goals for the global community to achieve by the year 2030. Ireland played a central role in facilitating this agreement and worked hard to ensure that gender equality was prioritised, both as a stand-alone goal and integrated across each of the other 16 goals.

Addressing the United Nations on the agreement of this framework, President Higgins told world leaders, “Let us be clear:  we cannot achieve the new Sustainable Development Goals if we do not achieve gender equality.  If we do not enable the true empowerment of women and girls worldwide our declarations will be shown to have been empty rhetoric.  We must change, gather momentum in our change, so that this does not happen.”

2016 will be a crucial year in beginning the implementation of these Sustainable Development Goals and ensuring that they result in real and lasting change in the lives of women and girls around the world. Irish Aid views gender equality as a prerequisite to the eradication of extreme poverty and hunger. As a result, we have placed the empowerment of women and girls at the heart of Ireland’s programme of overseas aid and it is an area in which we are recognised as being a global leader.

One of Irish Aid’s core priorities is the prevention of and response to gender-based violence in developing countries. Today, at least one in three women has been a victim of physical and/or sexual violence at some point in her life. In certain developing countries this figure can be as high as seventy percent. There is clear evidence that such violence has a drastic impact on women’s well-being and livelihoods whilst also inflicting a significant social and economic costs to the wider community.

Irish Aid works closely with governments and with international and grassroots organisations in countries such as Uganda, Zambia, and Sierra Leone to strengthen their capacity to respond to gender-based violence. Irish Aid also supports the development and implementation of laws and policies which prevent such violence from occurring. One such partner is the Ugandan-based civil society organisations, Raising Voices, which is internationally renowned for developing groundbreaking methodologies for the prevention of violence against women and girls.

With the support of Irish Aid, Raising Voices has generated a robust evidence base of what works in violence prevention and its methodologies have been adopted across east Africa and beyond. Next week, Irish Aid will co-host an event with Raising Voices at the United Nations Commission on the Status of Women, in New York, where key policymakers to discuss effective approaches in preventing gender-based violence in the region of East Africa.

Find out more about the work of Irish Aid in tackling gender based violence and the countries where we work.

Learn about the work of our Ugandan-based civil society partner Raising Voices in preventing violence against women and girls.